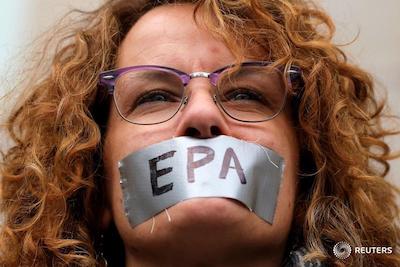 The Freedom of Information Act (FOIA) requires that all federal agencies make information available to the public on request, unless the information falls within a set of narrowly drawn exemptions.1 Processing FOIA requests is time-consuming and costly in terms of staff time. EPA decided years ago that it was more cost-effective to make data and information generally available through searchable public databases. EPA is far ahead of many other federal agencies in this regard.2

“EPA has a long bipartisan history of providing data to the public about pollution in their communities. Indeed, during the Reagan Administration, Congress passed the Emergency Planning and Community Right to Know Act, which included provisions for EPA to create a publicly-available inventory of toxic chemicals down to the local level. Similarly, President George W. Bush signed a bill requiring EPA to collect and disseminate greenhouse gas emissions data from industrial sources across the country.” 3

In response to numerous FOIA requests, EPA posted a mirror website on February 15. This website reflects what EPA’s website contained on the day before the Trump Administration took office. https://19january2017snapshot.epa.gov 4

One of the Trump Administration’s first actions was to institute a “gag order” on EPA and other agencies, while simultaneously removing references to climate change from White House websites.

“Memos ordered employees of at least four agencies not to send out news releases or to create social media posts, blog entries or official website content, and to consult with senior officials before speaking to the news media…Such memos or oral communications landed this week at the E.P.A. and the Departments of the Interior, Agriculture and Health and Human Services.”5

All four of these agencies have science programs, many with a focus on climate change, including impacts to public health and environment and climate resiliency.

The gag order has not been lifted and the White House continues to inject itself into everyday agency decisions. At the beginning of March, EPA’s top executives were told “for the next 30 days, the Administrator wishes to retain approval authority” for “Agency actions having significant regulatory and enforcement effect. “ Significant” is defined as actions that “limit energy resource use, impose significant costs on industry or commerce, or otherwise likely result in significant public attention on the proposed decisions or final agency actions.”6

Webpage censorship aimed at suppressing science also continues. Last week the word “science” was dropped from the title and mission statement of the Office of Science & Technology.

“The EPA’s Office of Science and Technology has historically been in charge of developing clean water standards for states. Before January 30 of this year, the website said those

standards were “science-based,” meaning they were based on what peer-reviewed science recommended as safe levels of pollutants for drinking, swimming, or fishing. Since January 30, though, the reference to “science-based” standards has disappeared. Now, the office, instead, says it develops “economically and technologically achievable standards” to address water pollution.”7

The calendars of EPA Administrator Scott Pruitt and EPA senior staff members were also recently removed from public view.8 The practice of making public senior EPA executive’s calendars has been in effect since the Reagan Administration, followed by all previous EPA administrators. Providing transparency around who EPA senior leadership is meeting with on a

Each year, EPA issues a report called the Toxics Release Inventory (TRI)10 which provides data about releases of toxic chemicals into air, water and land by zip code. The report details how much of each toxic chemical was released into each environmental medium (both lawful and un- permitted releases) and identifies the source of each emissions. TRI has proven to be a powerful tool for community members working to reduce pollution sources in their communities.

On March 7, Administrator Pruitt withdrew EPA’s Information Collection Request (“ICR”) for the oil and natural gas sector. The ICR was designed to collect data on how much methane is released from oil and natural gas operations through normal operations (including “flaring” and leaks). Methane is a toxic greenhouse gas that contributes to ground level smog. This information request was developed over several years with input from industry and the public. The ICR was withdrawn without notice and with a one paragraph explanation.

“In recent years, EPA has undertaken a careful, data-driven process to put in place protections to reduce pollution from the oil and gas sector. Often, EPA undertook such extensive data gathering to address industry concerns. The ICR was the latest data gathering effort, designed to ensure EPA had the full complement of information on existing oil and gas facilities. These existing facilities account for the vast majority of the sector’s pollution in coming years, yet remain largely exempt from any methane pollution control requirements… By withdrawing the ICR, Administrator Pruitt aims to shield the oil and gas sector from public scrutiny. Unfortunately, his penchant for secrecy with respect the oil and gas sector is familiar. During his controversial Senate confirmation process, Pruitt sought to withhold thousands of emails related to his ties to major energy interests who have donated to his political causes. While a number of those e-mails have been released, many more remain hidden from public view.

In a related action, GOP members of Congress are working to kill regulations controlling methane emissions on federally-owned public lands, using a procedural device that would make it impossible for agencies to issue new regulations. The House voted to kill the methane rule in early February on a party line vote.12 The Senate is currently trying to muster sufficient votes to kill the methane rule.13 Three Republican senators have signaled their intention not to support the rollback; at this writing, Colorado senator Cory Gardner reportedly holds the deciding vote.14 The federal methane rule is based on a rule adopted and in effect in Colorado; at a recent telephone town hall, Gardner expressed support for the Colorado rule, while questioning the need for the federal rule.15

“OPEEE leads and coordinates EPA programs to provide national leadership in promoting environmental literacy, in accordance with the National Environmental Education Act of 1990 (NEEA). In addition, OPEEE establishes and maintains close working relationships with a broad range of public- and private-sector organizations.”18

6 From an internal EPA memorandum that is (of course) not available to the public.

8 See an example calendar entry from previous EPA Administrator Gina McCarthy at https://yosemite.epa.gov/opa/admpress.nsf/0/85256CBD007E4BB785257F8800778E54. To access the links for EPA senior manager calendars, follow these steps. Got to EPA directory https://www.epa.gov/aboutepa/mailing-addresses-and-phone-numbers
Click on “Staff Directory” https://cfpub.epa.gov/locator/index.cfm
Click on “Senior Manager Schedules” https://yosemite.epa.gov/opa/admpress.nsf/Calendars?openview  A list of senior managers appears, not updated from the previous administration. Previously, people could subscribe to a list-feed to follow manager meetings. Now, schedules are not being posted, and the “feed” link goes to a dead link page.